Posted on April 8, 2011 by waggadventure

Not that either of us has ever tried to quit drinking, nor will we in the near future (see the bullet point in the last entry about the quantity of wine made in Australia); but everyone knows that Alcoholics Anonymous (AA) involves some sort of a 12 step process. 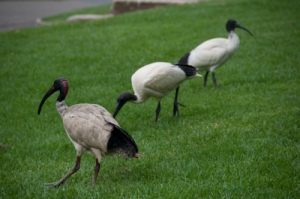 Well, getting cats into Australia is double that.  That they have all the regulations they do makes sense, as it is an island with a remote ecosystem, and they don’t want any interloping disease taking over. Cats aren’t indigenous to Australia; like the cute and fuzzy but extremely hated hare, they were brought in by Europeans*.  I guess the Australians should be happy it wasn’t small-pox infested blankets.  As a side note, ibises (see wikipedia for appropriate pluralization), which are extremely common in Sydney’s Hyde Park and botanical gardens, are also not indigenous. Australians seem to hate them, though we found them quite lovely.  Of course, we said that about magpies on moving to Edmonton, and Albertans loathe them.  But it isn’t the cat itself that the Australians don’t want coming from Canada – it is rabies.

Ellie, the gnarly but adorable 7-year-old queen of the household. Also lovingly known as Bitch.

So, there are tons of hoops we have to jump through to get Lester, Malachi, and Ellie into Australia. Microchips, tests, applications, special carriers, quarantine… Lisa is the queen of organization and is making sure all the steps get followed to a tee. Dan, on the other hand, is just bewildered by it all. His opinion is that in light of the mouse infestation in the Riverina (which fell hot on the heels of hairy panic), they should just be put on the list of desirable trades and given their own work visas. 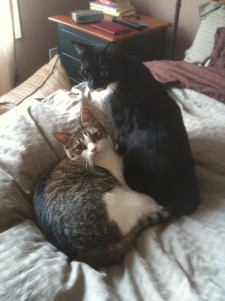 Lester and Malachi, 4 years old, brothers, and maybe the cause of Ellie's gnarliness. Lester is the deceptively cute grey and white troublemaker. Malachi is the one that looks like he should be living on a Namibian savannah, where he could take down a springbok.

But despite our best efforts, things can and do go awry at some steps.  Take the identification process, for example. Each cat must have a certain type of microchip that is readable internationally. Ellie had a chip, but Lester and Malachi were only tattooed.  On checking, Ellie’s chip wasn’t the right kind. So one cold January day, even though we didn’t yet have our visas, we got started on the process, knowing that the less time they spend in quarantine, the better.  Off to the vet to be chipped! Have you ever seen a cat get microchipped? Kind of like a tracheotomy on the back of the neck, the skin making a popping sound as the huge syringe breaks through; one of the vet techs really really hates doing it, and when they mistakenly gave Ellie the wrong kind of chip, she actually broke down and cried when she realized they had to do it again.  The sad thing was, they gave all 3 cats the wrong chip (only readable in Canada). So, now Ellie has 3 chips – her original, the mistake, and the correct one; the boys each have 2 chips – the mistake and the correct one.  The funny thing is that depending on where they start to scan the cats, the machine might read the wrong chip. So we had to note that on the forms, just in case. If the chips aren’t read correctly, the end result is a full six months of quarantine! Yipes!

Same trip to the vet they took blood for a RNATT rabies test (which needs to be sent to Kansas State University – the only place in North America that can do the test).  Anyone who knows Lester would say he is the sweetest, most docile cat on the planet. But stick a needle in him and he goes wacko!  It took 3 vet techs plus the two of us to get his blood.  I think there might have been some human blood involved too, not sent to the lab for a test, but spilled during the procedure.  This isn’t the first time Lester went berserk at the vet either: once when he was there for an ultrasound, they actually aborted the procedure and called us to come get him.  Nice kitty, just don’t mess with him.

Ellie, of course, was her normal subdued self and let them do their thing. Malachi: no problem either, until a couple of days later. Malachi is a sleek, panther-like creature, with short, glossy, black hair that he likes to keep clean. Really clean. He bathes a lot. A bit of kitty OCD maybe? The spot on his throat where they shaved to draw blood bothered him, and he ended up licking it raw. So he became a cone-head for a while. It was kind of pathetic, watching him try to back out of it, run into things, struggle to eat and drink, etc. But, at the same time, also pretty hilarious and entertaining.

That lasted for a couple of days, the cone stayed on for about two weeks, and he was eventually back to normal.

Anyway, the tests eventually came back (“negative”), then we took the forms to the Canadian Food Inspection Agency to have the cats certified as exportable (there are a lot of very inappropriate jokes that could be inserted here…but it is good to know that eating cats in Australia is considered “abhorrent“!).  Then a whole bunch more money was spent on the import applications.  Eventually those will be approved (we hope!), and we’ll be about half way through the process (i.e., right now we’re on step 8 of 24). We ordered the special carriers online, so will next need to work out the logistics of getting the kitties on a plane and to the quarantine facility in Sydney.  That will be another entry as things get finalized.

And as an update to the previous post: someone on Facebook pointed out that it didn’t say why we are going to Australia. It is actually in the About section of the blog, but for those who don’t bother with the fine print, Lisa has accepted the Professor of Information Studies position at Charles Sturt University.

* Any historical inaccuracies are because of sheer ignorance and lack of real knowledge of history. How cats even ended up in Canada is a mystery.  Michael Olsson will no doubt provide corrections about all things Australian in the Comments! Thanks Michael!