Small towns don’t always have all the amenities of big cities. But then again, not all big cities are created equal either. So while Wagga might not be Edmonton, in terms of what there is to do, Edmonton isn’t Vancouver, Toronto, London (UK….we left the other one to come here, and Edmonton has more), Paris, Sydney, or all those other cities we like to visit. 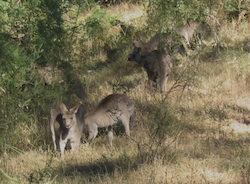 Wagga may not be London, Paris, or even Edinburgh, but none of those great cities of Europe have kangaroos. These ones aren't Wagga 'roos; this photo was taken near Towoomba in the Blue Mountains west of Sydney 0n 0ur first trip to Australia, but they will be similar.

When we lived in London, we frequently drove to Toronto for the arts and food scene. One year, we drove daily for the jazz festival, because we couldn’t get time off work and school to just spend a few days. The 2 1/2 hour drive was nothing. London is a city of over 300,000 people, but it had the unfortunate situation of being between Toronto and Detroit, so there was no reason for any interesting touring musicians to stop there, for example. It is supposedly a bit better now, but probably not much.  Similarly, there was no Ikea. London wasn’t a ‘supply hub’ for the region, so despite its size, it actually just served more as a commuter suburb for the GTA.

Edmonton, on the other hand, is the big city in north-central Alberta. People come here from northern BC, northern Saskatchewan, Yukon, and the Northwest Territories to shop and be entertained. It has an Ikea, as well as the West Edmonton Mall(you can stay at the Mall; many people do – to swim in the fake pool, lose money at the Casino, watch the Penguins in their concrete pool). It has all the big chain stores. You can buy pretty much anything you want here. It has a lot of major concerts.

The Wagga art gallery isn't as spectacular as the new Art Gallery of Alberta in Edmonton, and probably won't have a Warhol exhibit any time soon, as the AGA does. But we shouldn't be too quick to say that, as the Wagga gallery does have a Goya etching show coming, very similar to the one at the AGA last year.

There is finally a great art gallery. Edmonton is, mostly, a real city.  But the longer we have lived here, the less important some of those aspects have become. We’ve outgrown Ikea. We hate the Mall. We don’t listen to mainstream music (and even if we did, we don’t like concerts in places like Rexall). Much of what a big city has to offer isn’t of interest in this point in our lives. We are looking forward to a small town life, more relaxed, less hectic. Maybe we’ll even get to know our neighbours! Here in Edmonton, we’ve spent countless summer days and nights (thanks to the very long days and few bugs!) on the front porch, playing cribbage and drinking wine, with not another person in sight (except as they ran from their SUVs to the front door or let the pooch out to pee).

The big attractions in Wagga seem to be the museum, the art gallery and the…OK, so there aren’t any more. Maybe the race track. Many of the Commonwealth countries that have retained a more British influence still take this seriously. There was a big race recently; people dress up and go for the afternoon, presumably to drink way too much and socialize more than for the actual race. That’s horse racing, to be precise, not cars or dogs, in case anyone was wondering. The ladies wear hats – or fascinators, as is all the rage now (thanks Duchess of Cambridge!); Lisa is looking forward to purchasing something really wild for next year’s event (watch this space for a pic).

The museum and art gallery are small-town places – we don’t anticipate any major exhibits of modern art, for example, but we will be going to each new exhibit. There’s also a theatre that seems quite busy, with some sort of show 3 or 4 nights each week. These range from drama to musicals to ballet to…well, should I even mention the Meatloaf and Rod Stewart impersonators there recently?  We don’t go to theatre in Edmonton, but might try the Wagga one (oddly, it might be more interesting to us than the polished, professional theatre in Edmonton!). We wouldn’t go to the Meatloaf or Rod Stewart impersonator, but then we wouldn’t have gone to the real thing here, either. Did we mention that we both grew up in small towns? Lisa in Owen Sound, Ontario (which then, and now, has a population of 21,000); Dan in Pike Bay, Ontario, a hamlet of about 50 people… if that.

What Wagga is hoping to get is a new museum, dedicated to the life of Dame Edna Everage. 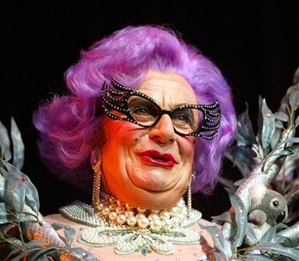 Dame Edna was 'born' in Wagga... Would you come to a museum of her life? Wagga Council is hoping so, and so are we so you will have something to visit.

For those who don’t know Dame Edna, she is a fictitious character created by, and played by, Barry Humphries. Her show used to be on television here in Canada, and was actually quite funny.  Dame Edna was born in Wagga, hence the proposed museum.  The best thing about this: Barry Humphries was born in Melbourne…Dame Edna is a character, but has a very well-crafted history. So, the museum would be in the birth place of someone who wasn’t actually born.  Canadian comparison would be a Red Green museum somewhere, if Steve Smith (the guy who created him) actually bothered to create that complex of a life story. Maybe he has, but we’ve never paid attention.

What else does Wagga offer? Well, for one, a more laid-back lifestyle. It is a more outdoorsy world, a rural community based on agriculture more than business. It doesn’t have the crazy traffic that Edmonton has – we will be so happy to let go of that horrible “15 km in 45 minutes”  commute each morning.  It has a cool little downtown. It has wineries. And wine festivals. It has Thai food, Indian food, a couple of excellent nouveau Wagga restaurants… so we won’t suffer!

What doesn’t it have? It doesn’t have traffic (as already mentioned, but worth mentioning again). 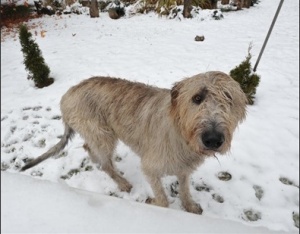 This dog was devastated that it snowed in the Snowy Mountains. For those of you Riverina residents crying over the snow, don't cry too hard because your tears might overflow the Murrumbidgee River and Wagga is on a flood plane.

It doesn’t have snow. That is a huge one!  It snowed in the Riverina this week…5 centimetres of the white stuff made huge headlines in the newspapers; people (and dogs) got photographed standing in it. One resident commented that “there was even snow on the windscreens [windshields, for North Americans] of cars.” But it didn’t blanket the entire area; Wagga didn’t get any as far as we can tell. The hardest hit place was a town called Laurel Hill (population about 165). What is missing, however, in all the online accounts of this devastating blizzard is that Laurel Hill is in…drumroll please…THE SNOWY MOUNTAINS. And it is winter. Cry me a fracking (nod to BG fans!) river…you don’t know snow and cold. Comparatively, for Canadians, this would be like whining that Jasper got a bit of snow in late November. Of course, the Laurel Hill snow would have melted by noon, because it got up to a ‘chilly’ 5 or 6 degrees Celsius that day. Yes, maybe cold for there, but for anyone who has lived in Edmonton for the past decade, bloody tropical.