People have said that when they leave a climate that has four distinct seasons (like much of Canada), they miss it. And seldom do you hear of people leaving that type of climate for one that is all snow – most would go to a more temperate climate. Sure, technically every place has winter, but many places don’t get really cold and snowy. This includes Wagga, where winter days start with cool to cold mornings rising to low to mid teens (Celsius) during the day.  After living in Edmonton, we don’t think we will miss Canadian winter.

We saw some beautiful fall colours while driving in Ontario last autumn. Unfortunately, this horse got in the way.

There are a lot of Canadian things we will miss though, and as we celebrate our last Canada Day in Canada (this is being posted on July 1…not sure when you are reading it), at least for the foreseeable future, it is time to reflect on some of our favourite Canadian things (not including family and friends, of course…).

Maple trees. The maple leaf is the iconic Canadian symbol, and maple syrup is the iconic Canadian food (well, that and Tim Hortons’ donuts).  But many people don’t realize that maple trees aren’t found in much of Canada. We grew up with them in Ontario, and when we moved to Alberta we realized that was one of the things we missed.  The gorgeous colours of the leaves as they turn red and gold in the fall is something that we love to see on our annual trip home at Thanksgiving. Edmonton trees turn yellow. For 2 or 3 days. It isn’t the same.

This photo was taken on Tarcutta Street in Wagga. The purple tree is a jacaranda, and the one in front with yellow flowers is a banksia. These are pretty, but can you make syrup from them?

We know very little about Australian trees, but we don’t think there are maples. There are huge fig trees – there is one in the Sydney Botanical Gardens that most of the population of Pike Bay could live under.

And there are jacaranda trees, huge and purple, that are stunning. These will have to replace the maple colours for us.

Ice hockey. Lisa became a big fan during the Memorial Cup; she and her dad watched the  Owen Sound Attack games together… But that’s about it for our interest in hockey, or really any sport. Oh yes, Lisa has also been known to watch the Superbowl and CFL finals; but that’s it! Seriously! So, we won’t miss it much. We’ve been warned that we should learn about cricket when we get to Australia. Seems a bit boring though, kind of like baseball but with less action (is that possible?!). If we want to watch any sport, it might be rugby, or more likely Rules – what Canadians call Aussie Rules Football, but for Australians that would be like the Scots calling whisky Scotch. Charles Sturt University has a Rules team, called the Bushpigs. Rules looks kind of like rugby with a bit of MMA (mixed martial arts) thrown in, just for fun. Definitely worthy of its own post in the future, with lots of photos.

Canada geese.The loud honking of the geese is a common sound over Edmonton during spring and fall migration. And their shit is everywhere in parks all across the country! We’ve become very good at avoiding their green algae-like poop at Jasper Park Lodge. 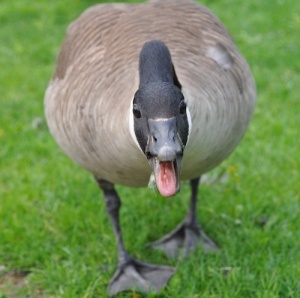 We like geese, despite the fact that this one tried to kill Dan recently.

We also really like seeing the multitude of varieties of ducks in Canada; there are something like one billion different kinds of ducks in Alberta. We don’t know if Australia has geese or ducks. There are kookaburras, parrots, ibises (ibi?), and probably some other birds (are ostriches and emu really birds?…they don’t fly).

Bears. Love them, from a distance. Grizzlies are our favourites, but they are hard to find. Black bears are also pretty cool. Both of these are found in the Rocky Mountains. Ontario has brown bears. Dan used to see them around Pike Bay occasionally. The Latin word for this type of bear is Ursa. We don’t know if Australia has Ursa, but they have koalas. They are cute, but smell like ass (apparently; we’ve yet to experience this ourselves).

Beers. There’s some exceptionally good beer in Canada. Steamwhistle and Mill Street, both made in Toronto, are very good. There are some good stouts made in Ontario too, such as the 10W40 from Neustadt, just outside of Owen Sound. There are great beers made in Quebec, such as Dieu du Ciel. There’s OK beer made in Alberta, but nothing really spectacular. There’s also a lot of horrible beers in Canada, such as the iconic Molson Canadian and Labatt’s Blue.  We will possibly be able to find those last two in Australia, but the micro-brews that we like to sample will be something we will enjoy when we visit Canada. 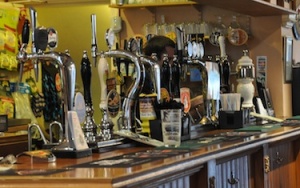 Beer in Canada is good, Australia we're not sure about. However, the UK is the place to be for beer and ale. This was a typical line of taps in a pub; many had more, and lots even had their own exclusive cask ales. Yummy!

We don’t know a lot about Australian beer. The big ones are probably Fosters, Tooheys, Victoria Bitter and Coopers. They are comparable to Canadian and Blue. There are, supposedly, some good micro-brews though. When we visited Wagga last year, we didn’t see any local beer but since we were there the first micro-brewery opened. Thirsty Crow just won a huge competition too. We are really looking forward to trying their beer, and the restaurant menu looks pretty interesting too. Watch for a full post on this place!

Snow. We kind of addressed that right off the start. It doesn’t get much more Canadian! We won’t miss it. Well… we’re sure to miss the romantic notion of snow (softly falling outside the window while we sit by the fire); but we will not miss the horrible ruts in the roads (Edmonton could not figure out how to plow the white stuff) or the -40 temperatures. There are parts of Australia that get a bit of snow occasionally, so if we get nostalgic we can hunt it out, see the 2 cm of horrible white stuff, and get the hell back to warmth.