Peter Parker to the rescue

Posted on August 6, 2011 by waggadventure 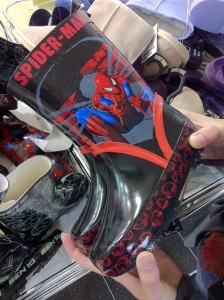 Lisa wanted to buy these boots for Dan to wear on his morning hunt, but they only came in kids' sizes.

Every morning, Dan gets up, puts on his robe, shakes out his slippers and walks to the pantry, where he grabs a can of bug spray and goes on patrol, all the while singing Spiderman, spiderman, does whatever a spider can…

The house had been empty for about 6 weeks before we moved in. We took possession on a Monday, and moved in on the Wednesday. The days in between were spent putting together the bed and other bits of furniture and cleaning.  It was, generally, pretty clean…just needed a bit of de-bugging really.  When we got first got here, there were a few dead insects on the floor and, we found out, a few live ones as well. On the second day, Dan spent several hours hoovering (do Aussies use hoover as a generic term for vacuum, like the Brits do? And since we bought a Miele vacuum, should it be Miele-ing?). He did the carpets over and over again, went around every room with the crevice tool to get at the edge of the carpet, did the inside of closets and cupboards, everywhere he could basically. This got rid of all the dead spiders and a few live ones, and hopefully any nests/eggs that were around.

The next day, when we actually ‘moved in’ (brought the last of our possessions from The Lawson and prepared to sleep here that night) there were a couple spiders in the rear living room. These were quickly dispatched with Raid, and he vacuumed again.

And we think that we are winning the war, but there are still some here, despite a lot of suction and spray.

This is what we find in the back living room some mornings, a hairy black spider sleeping at the edge of the room.

The ones we find in the back living room are fat and hairy, with a huge abdomen (kinda like a lot of men [and a few women] around Wagga). They mostly are curled up where the carpet meets the wall, and when sprayed with Raid or Hovex just curl up a bit more and die immediately. There have been a few smaller ones too. Our research has us thinking that the big ones are the females and the smaller ones are the males. They are, again according to what we can find on the web, simply called ‘black house spiders’ and they aren’t lethal.

They seem pretty much restricted to the back of the house for some reason. We haven’t found many in the master bedroom fortunately; there was one snuggled up in a corner in the walk-in closet, but that is it for that area of the house. Most of them have been in the living room, with only a few even coming as far to the front as the dining room. One tiny little guy was on the wall in the front hall a couple of days ago, but he seemed pretty harmless. 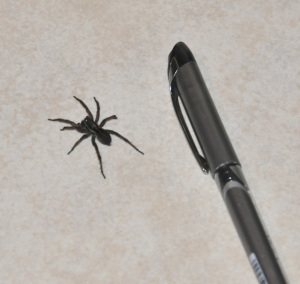 This is one of the spiders that just appeared on the dining room floor. Before killing it, Dan tossed a pen down beside it and photographed it so you can all see how bit it is. Nice of him, eh!

The ones we have found in the dining room are more interesting. They are also black and, again according to our web findings, also called ‘black house spiders’ (there are something like 17 different spiders sharing that name). These ones are bigger and sleeker and faster and don’t die easily. And we can’t figure out where they come from. We’ve had two so far, and both just sort of appeared in the middle of the floor; we would leave the room for a few seconds, come back and there they were.  The first one was late at night; we were just going to bed and Dan had left his phone in the kitchen. Since we use it for an alarm clock, he went back to get it and there was this spider. He sprayed it…and sprayed it…and sprayed it again, chasing it across the room until it finally slowed down. Eventually, it crawled onto a napkin he had tossed on the floor, which he then folded over it (using a walking stick to maintain distance) and then crushed it.

The other one appeared one morning after the spider patrol. Dan had just gotten out of the shower and Lisa was coming out to kitchen to make tea. The spider was on the kitchen floor, near the door to the second bathroom, where Dan was drying off. He heard the sssssssssssssssssssssss of Lisa killing it with Raid. She used enough that if the chemical wasn’t going to kill it, it would drown. Later that morning came our only spider-related incident: Dan was heading back into the bathroom and slipped on the puddle of bug spray that Lisa had tried to drown the spider in. He ended up flat on his ass on the hard tile floor. His butt still hurts! Maybe the Spiderman rubber boots would have had more traction than his Fluevogs.

We're trying two different bug sprays. And we also plan to make sure we always have a spare can in the pantry.

Our daily vigilance seems to be paying off. A little over a week ago, we went to Bathurst for 2 nights; Lisa had to go to the CSU campus there for some meetings, so Dan tagged along rather than sit at home alone in an empty house. We thought that we might come home to a herd of spiders after that, as we hadn’t been fighting them for a couple of days. But no, there were none. We think we are doing well. We know that we won’t ever be rid of them completely, but if we can keep it to only a couple each week we will be happy.

The only real spider concern we have now is about the outdoors.  We will be gardening…and there are deadly spiders out there, we are sure. Dan has a tendency not to wear gloves while gardening but has promised that he will here. There are redback spiders that bite. We know someone who got bitten by one, and she says it caused a lot of pain for several days. She went to hospital, but all they could do for her was give her an icepack and some Tylenol; at least we know what to do if that happens to us. They won’t kill you, but you will hurt bad. And those are just the ones we know about.

Though we think we have things under control in the house, what is lurking in the garden shed remains a mystery. Dan will probably just open the door and empty a can of Hovex into it then wait a couple of days before stocking it with gardening equipment.

So, for the next while anyway, we remain vigilant. We shake our shoes (probably un-necessarily), and swat at every little itch and twitch on your body. And we wonder what kind of interaction there will be between the spiders and our cats, who arrive in a couple of days.

This post was for you, FFG. And sis, we hope you made it this far.

Canadians newly relocated to Australia.
View all posts by waggadventure →
This entry was posted in Australia, danger, gardening, spiders. Bookmark the permalink.

3 Responses to Peter Parker to the rescue