Posted on September 29, 2011 by waggadventure

As mentioned previously, last week was Bike Week in New South Wales. Every city/country/state/province has something similar…a time when they encourage people to ride their bikes more often but spend more on advertising the event than facilitating it. So there are bike week events around Wagga, but after it ends it won’t make any difference (cynics are us!). And later this spring (yes, it is spring here) CSU (through its ‘green’ office) is having a “bike to work day”, where people can meet at a local cafe, have coffee, then ride together. Great idea (though why it isn’t part of Bike Week makes no sense); but then there aren’t convenient places to change your clothes or shower once you get to work (and it might be really hot!). And neither of us have good places to park our bikes – yes, we can just take them into our offices, but in the grand scheme of things if you want people to ride to work, provide secure parking, showers, etc. 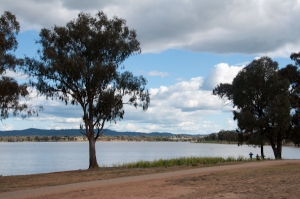 This is Lake Albert, one of the places we ride frequently. It is a nice ride but people tend to walk in the middle of the trail with headphones on; they are not able to hear your bike bell and get out of the way, which is really annoying.

As part of NSW Bike Week, Bicycle Wagga Wagga (BWW) held a few events. We’re not sure what most of them were, but Dan did take part in a 2 hour social ride on Sunday with a group of 17 riders, meandering through the rural area around the Lake Albert neighbourhood. Lake Albert is a small lake about a 10 minute ride from our house, and a regular ride for us; we can get there, do two and a half loops around it and come home a different way, in a little over an hour. It was a fun ride that Dan went on, though he is thinking that he probably could have gone on the more advanced 50 km ride, rather than the slower 35 km route. Lisa would have gone, but she had been away seven of the past 10 days, and was leaving again on Monday for another couple of days away, so had a lot of work to catch up on. 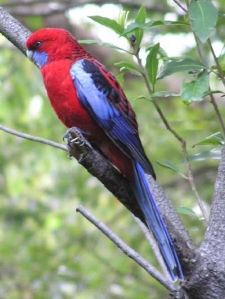 This is a crimson rosella. They don't swoop at you like magpies do, and they are very pretty.

Usually we just stick to the good trails – mostly paved (or as they call them here ‘bitumenised’) with just some gravel or hard dirt patches. But there is one that Dan likes to do occasionally that is just a narrow path through Rawlings Park, just southeast of the lake. It isn’t very long, but it is a beautiful area of gum trees that are home to crimson rosellas and red-rumped parrots, that then opens onto a pond with lots of ducks, purple swamphens, ibises, and the occasional egret or heron.

Another common ride takes us north into the CBD, along the Murrimbidgee River, then a loop around the Turf Club (the horse racing track).  This one involves more road riding, but most of the streets we use have bike lanes. The only real challenge was figuring out how to use the roundabouts…is it safer to dismount and cross on foot, or to just ride through? Still not sure, and it really depends on the amount of traffic.  Something interesting that Dan found out on the BWW ride was that we have been signalling incorrectly. In Canada, you use your left arm for signalling: straight out is a left turn, bend it up for a right turn, and bend it down to signal stopping. Here, the law (convention?) is to use your left arm straight out to signal a left turn, and your right arm straight out to signal a right turn. Stopping is your left arm bent up. Luckily Dan hasn’t been hit by a car while signalling that he was stopping when he thought he was signalling to turn right. Oops!

Australians take their cycling (like any sport) quite seriously. And this means, like with any sport, having the correct clothing. Everyone who rides here not only wears the padded pants but also has a jersey.  Every bike shop sells a variety of them, many of them branded with their store name. We used to think these things were just for racers, but on the BWW social ride, almost everyone was wearing them. Luckily, so he didn’t stand out from the crowd, Dan had just bought a couple on a really good sale at Rebel Sport, so didn’t show up in the bright yellow Manchester United football shirt that he often wears (comfy, and very visible!). And yes, even Lisa has real bike wear. 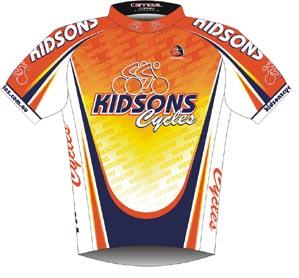 We didn't buy shop-branded jerseys, but it is amazing how many of these Kidsons shirts, and Kidsons shorts, we see riding around Wagga.

Because the Aussies are so into biking, there are a lot of trails and organized road rides. BWW runs them a couple of weekday mornings (not much good for us working folk), and a Sunday afternoon ride that we will start going on occasionally (moving to Sunday morning for the summer because it will be too hot in the arvo). Canberra, the closest big city to us, has an extensive network of trails that we hope to explore. And one of the riders Dan rode with last week told him about a really great trail in Victoria, where they have paved over some old rail lines. She had recently done one from Wangaratta to Bright – 96 km of flat, level terrain, going through small towns that are used to cyclists and very bike friendly. She said you park in Wang (Victorian shortform), ride to Bright in one day, overnight in a pub (where you park your bike in the room), have some great food and local wine, and then ride back the next day. All she said you need to take is a water bottle and a pair of clean undies!  Sounds like fun. But not as much fun as the Tour de Rutherglen winery ride, where a group of cyclists tour the region known for making the best dessert wines (aka stickies) in the country (world?).  After several wineries and lunch, they check to see if you are still legally allowed to ride. If not, or if you don’t think you can continue, they take you back to your hotel. We heard about this one too late to plan it for this year, but will definitely be doing this next spring! Anyone want to join us? We can probably find a bike hire (rental) place somewhere…

4 Responses to Biking around Wagga