One day last weekend, we realized that we have been here for 6 months. We actually missed the proper anniversary day – we might have celebrated it somehow (pizza and beer at Thirsty Crow?) if we had remembered.  But in honour of our being here for a full half of a year (and part of three seasons: end of winter, spring, start of summer), it is time to revisit some of our previous posts and offer a few follow-ups. 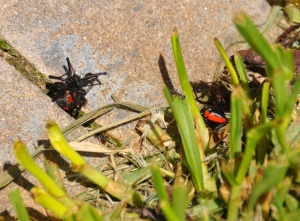 Even after being drowned in Raid, a redback is pretty distinctive.

We have the spider population as under control as we will get it. The Mortein can says it is effective for “up to 6 months”, but at about 3 months webs started appearing along the eavestrough, so Dan did another extermination. We have a spider or two in the house most days, ranging from tiny to not-so-tiny. But we’ve figured out what ones are (mostly) harmless (the ones in the house generally) and just whack them with whatever is nearby. Lisa even hits the odd one with her hand now. And her best kill was two redbacks! She was working at home one day, out on the patio, and happened to see one in one of the boxwood bushes.  After first photographing it, she sprayed it with Raid, and then realized that there were two dead ones on the ground. Good hunting. (Last minute update: Dan smashed a huge white-tailed spider with a rolled up newspaper this morning, in the middle of the dining room floor. We aren’t sure if it was still alive, or the kitties had already killed it. And according to our spider book, these guys (white tails, not the cats) aren’t as dangerous as people often say, but we still don’t want them around.)

Malachi has learned how to sit on the post too. We don't know if Lester taught him, or it was a natural reaction to a spider.

The cats have also learned to hate spiders; they act as an early warning system by circling the intruder and looking worried… but they are smart enough not to touch anything that enters the house (funny that! They used to eat anything that moved in Canada. Good instincts).  The kitties have also settled into Aussie summer (shedding like crazy, so Lisa has taken to brushing them daily) and no longer jump at the sound of the magpies or Galahs outside the window. Overall, they are back to their normal routines – following Lisa around the house while pretending that Dan doesn’t exist. And Lester had to go to the doctor recently for an infected cut on his chin. We’re not sure if it was from fighting with his brother or a spider, but it required 10 days of medication.

When we were at the Apple Blossom Festival in Batlow, we saw that the orchards had netting over them; we didn’t know for what (sun? fruit flies?). Turns out it is hail netting. But a major storm whipped through the Riverina in early December and the netting didn’t hold up. About 60% of the Batlow apple crop was destroyed.  The area was declared an agricultural disaster zone, meaning the growers will get compensation for lost crops.

All this netting didn't manage to keep the hail off the apples. We have been told that it is quite useful when orchard owners want to hide their marijuana crop from police helicopters though.

But interestingly, weather patterns here are such that Adelong, just a few miles away and on lower ground, didn’t get hit; we have been buying apples at the market from a guy from there and he said his crop is doing well. So the price of apples is probably going to be high this autumn, much like bananas were in the winter because of last year’s storms in Queensland. When we got here, bananas were about $14 per kilo. Now they are at about $2/kg and have even been down as low as $1. Yay!

The cherry orchards in Young also had a shitty year. On our last trip there to pick, there were a lot of bad cherries. It seems that when a cherry gets too wet, it splits then rots on the tree. And it rained quite a bit this year. According to a news report, Ballinaclash lost about 60% of their crop; not fully lost, but they couldn’t sell them as cherries. Instead, they process them there, making jam or even wine with them, in an attempt to not have a complete loss for the year.  And while at Casa Luna at year-end, we heard stories about how cherry growers in Shepparton (Victoria’s equivalent to Young) last year got a lot of rain, and actually hired helicopters to fly/hover over the orchards to blow the water off the cherries. Wow! This must have cost a lot of money, but might be better than losing an entire crop. 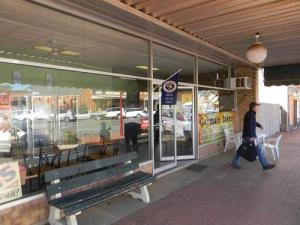 Anyone want to buy a bakery? The Australian government would probably give you a visa... And Ganmain is a nice little town.

The Ganmain bakery went up for sale a while ago. These are the people that make the famous Ganmain Pies that Dan ate in the competition. The owners were retiring, according to an article in the Daily Advertiser. We haven’t seen a follow-up, so don’t know if it sold yet or not. The Ganmain Hotel is also up for sale. It is a 9 room hotel, has a pub and some pokies. And a food service area that is closed. According to the ad, it does about $7ooo business each week, but could be more if the new owner re-opens the restaurant. It was passed in (the Aussie term for “didn’t sell”) at auction. No one met the reserve bit of about $450,000. But there were interested buyers, and it was hoped that a sale would be negotiated soon. This doesn’t bode well for Ganmain; two of its major businesses both being up for sale and not getting a lot of interest. Small towns here, like everywhere unfortunately, are dying out…

Speaking of dying out, the CSU cheese factory has closed (shock! horror!). The exact organizational structure of it has always boggled us. With the winery, we understand that it both supports and is supported by academic programs. But the cheese factory was different. It seems that Barry, the cheesemaker, leased this space to make CSU-branded cheese. You could buy it at the CSU winery cellar door, Wagga farmers market, a few local shops, such as Knights Meats and Duffy Brothers. But he also sold it to CSU for their use; pretty much any university function features CSU wines and cheeses. But economically, it wasn’t feasible for the uni and at the end of this  year, Barry got the boot. He’s not going quietly though. The Daily Advertiser has run several articles, all from his side of the story, about how he thinks he should be able to buy the equipment to set up shop in Coolamon. He even has a lawyer involved. The uni isn’t responding publicly. We don’t know what is going to happen, but if he doesn’t continue making cheese somewhere we are going to miss his cheese. It is generally really good – and even if someone might not like all of them (and we don’t), you have to give credit to a guy who developed a new style of cheesemaking.

And in case anyone cares, Dan made it through magpie season without getting hit (oh, you would have heard if he didn’t – he would have been announcing that proudly!). A couple of close calls while riding to work, even with the idiot sticks on his helmet. A couple more close calls after he took them off, but no contact. And, in a moment he is quite thrilled with, he actually did get hit by a parrot! Again at Lake Albert, a guy riding a horse beside the trail rousted up a flock of red rumps and one ran into Dan’s shoulder as he cycled by. How cool is that!!! Almost as cool as cycling beside a kangaroo near Balldale (yes, that happened too!).

No, Lisa doesn't have the puffy coat out because NSW had a cold spring. She is heading back to Canada (and Texas and Quebec) for a couple of weeks in January. She will have to wear it, while Dan will still be in shorts.

So lots has happened in the past 6 months, and we are starting to feel like we live here. One evening last week it dropped down to about 21 Celsius and, like a good Aussie, Lisa was chilly. We actually ate dinner inside this past Monday because it was only 23 on the patio. Dan, however, is still acting like a tourist, and hasn’t worn long pants in 2012; he says he can make it the entire year in shorts – so the challenge is on! (Last minute update 2: we awoke this morning to an unseasonably cold day, and Dan is wearing jeans to work…so the short pant streak has ended at 10 days.  Another one will probably start tomorrow though.)

We’re looking forward to the next 6 months. We signed another lease on the house…buying right now isn’t feasible, but maybe by July. Of course, if we do, we’ll be in the process of moving and probably miss the 1 year anniversary of our arrival. If we do remember it, Thirsty Crow, here we come.

And maybe after year, we will have figured out what a rissole is, too.