the sound of one hand typing

While sitting on the bed in emergency at Wagga Base Hospital yesterday, waiting for the doctor to come back to glue my eyebrow back together, I (Dan) licked the inside of my sore lip and dislodged a pebble.

Spitting it out, I said to lisa (who was sitting there bored and hungry, but concerned)  that it made me feel better getting that piece of grit out of my face. This was about 3 hours after I sent her this text:

Not good for typing…so rather than work today (where I type a lot) I am staying home and blogging!

Yes, after more than 4000 km of cycling around wagga, I had a crash! Not nearly as bad as it could have been – i was well enough to text lisa as the driver and i waited for the police, but right now i am sturggling tp write this blog with a somewhat damaged left hand.

here’s what happened: I was riding home from work, just about there, a few hundred metres from where i turn off the major road into our ‘hood. I had just reached the top of the last hill, pumping along at 30 k/hour, as a Landrover passes me then turns into a driveway…across in front of me. I brake hard with both hands, and physics, precisely inertia took over: rubber pads against wheels stop them from turning, rubber tires sliding rough tarmac stop the bicycle quite quickly. But Newton would have also explained that the 80 kg person perched on said bicycle, with no resistance (friction) to slow him down, probably isn’t going to stop as fast as the bike. That person will continue on down the road… or more accurately forward and then down on to the road. At which point, more friction occurs. Did Newton know about road rash? And is there an equation that explains how both the bike and person will end up in the same place…with the bike on the rider’s back?

My beloved ‘pushie’ came out pretty much unscathed I think. Haven’t done a close inspection, but I think just a reflector and the bell are broken.

So there I am, sprawled on the pavement, bleeding from a lot of places. Not sure what hit first, but the parts with most damage were my left hand, my right forearm, my right knee and the right side of my face. I think that was what hit first – the visor was knocked of my helmet but otherwise it didn;t sustain damage (but i will replace it asap!); my sunglasses are in pieces (that’s a long story…it took me forever to get these prescription sunnies!) and I think they might actually be the source of the huge gash on my eyebrow. A lot of skin off other places (knee, both hands, arms, chin), a black eye, and a dislocated finger. Middle fingers on left hand are taped together to straightn the injurded one, so typing is a bit of a challenge!

Last I heard from the police, they dodn’t know if the driver of the car would be charged with anything. He is adamant that he did nothing wrong and that i wasn’t near him…he is wrong! He has no idea how fast a cyclist goes! There were two witnesses whose numbers I gave to the police who would say that theuy guy cut me off, so hoopefully they call them.

I want him charged with careless driving or something like that because 1) he was driving dangeroulsy and  is oblivious to cyclists and people like that need to pay! and 2) if he is charged/convicted, his insurance will pay for my new sunnies, a new helmet, a new iphone holder, broken reflectors…. But I’m not holding out much hope because since we didn’t actually collide, it is just which story the police beleive. The driver was denying it right from the start – even when I asked him to call police and he didn’t know number I told him call 000 (the emergency number, similar to 911 in North america) and he said that was for emergencies…to which i replied that i think the amount of blood coming out of me constitutes an emergency. He then told the dispathcer that some guy had fallen off his bike and didn’t need an ambulance! It wasn’t until Lisa got there (responding to my text) that she called 000 again and got ambulance…and the police just got there then too. Not sure what took them so long.

I wasn’t sleeping, I was seething in anger. Not at the guy who cut me off but at Lisa who wouldn’t let me do a facebook ‘check in’ at the hospital. She thought it might worry people.

Despite a lot of bad press about the state of the hospital here, I have to say I had pretty good service from the entire health/medical aspect of it. The two paramedics were a hoot…really nice guys. And for some reason, probably stress, my heart was beating irregularly so though they said I should go to hospital for wounds, the heart thing made it even more serious to them. So, they rush me to the hospital where I then quite quickly got into a room and put on a heart monitor – as they said, even though it was busy, they got to jump the line with me because I was a combination cardiac and trauma…that beats out on just one problem! The nurse who put me on another monitor didn’t see any problems with my heart though (but it did get a bit wacky again when one of the paramedics came to say goodbye, so I think it was a reaction to him). But based on the paramedics’ report, they did an ECG: all clear… And luckily with our residency application under review, we have medicare, so between that and our supplementary private insurance this should all be free (ambo would have been close to $400 otherwise…ambos from motor vehicle accidents are free, but with no contact this wasn’t one!)

The poor nurse who was looking after me was run off her feet with five patients in emergency, but remained quite chipper. When I showed her my swollen, askew fingertip, she said “that kind of looks like it is probably a little bit broken, I’ll find you some ice” and every time she came back for something, or just went by, she reminded me she was still thinking about my ice! Never got it, but she seemed to be trying. 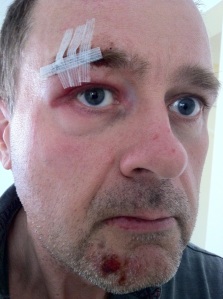 This is the cleaned up version, 23 hours later. I feel like I just lost a boxing match. And I probably should have shaved yesterday before work, because I probably won’t be for a few days.

The doctor who finally dealt with me was a bit aloof – he was a new resident and I think out of his element but he did OK. I don’t think he took my finger pain as seriously as I did, but eventually, after gluing my eyebrow back together (not bad enough for sutures) did send me to get the finger x-rayed. And when it turned out that the end joint was a bit dislocated, he just loosely taped it to the one beside it and sent me home. Where I proceeded to remove that tape, clean the pebbles out of the gash he had ignored, and re-tape it a bit tighter…i want it straight!

The x-ray tech was probably the worst. He kept moving my hand around, trying to get the right view and hurting me. Eventually he noticed and asked if he was hurting me – i pointed out that i was there for a potentially broken finger (as if the bruising and swelling wasn’t obvious to him) but that other parts of my hand were missing several of the outer layers ( I would say skin, but I think it went more than skin deep in places…22 hours later, as a type, my left hand is still bleeding!) Oh well, I know that his treatment of me means that he has to clean my blood off of his equipment 🙂 If he would have been gentler, it would have been cleaner.

And then, finger taped, face glued, we leave, 5 hours after the actual incident. And head straight to Wagga Thai for takeout because we are starving. Takeout because during all of this, noone ever attempted to clean me! So I was still coated in blood and pebbles, and still wearing my bike clothes so getting a bit chilly!

Overall, it could have been a lot worse. The paramedics said they hate getting calls about bike/car interaction, because they are never good, so were quite happy to see that in the grand scheme of things mine was pretty minor! Who knows, it might have been so minor that if they weren’t worried about my heart I might still be waiting in emergency.

6 Responses to the sound of one hand typing