Unlike most of our blog posts that are full of wisdom and insights about our new life, this one is pretty much about nothing. Lisa is off to North America, and has left me (Dan) behind with really one task – take care of the cats. This isn’t really too hard; they need fed and watered (mostly Lisa’s job, but I do it too), litter box needs to be kept clean (my specialty), and the water fountain needs cleaned weekly (which she taught me how to do last week…easy).

So, other than that, nothing. Except take them for their annual vaccinations. Take three cats to the place they hate the most.

Saturday morning, I spent an exorbitant amount of time catching them and loading them into their carriers so I could take them for what should be a 15 minute appointment. And Ellie, the first one trapped, probably felt like she spent an unreasonable amount of time in her carrier because she was first one caught. Then Lester, who wasn’t too hard to get either. It is Malachi who is good at finding that exact spot under a king-sized bed that can’t be reached.

Wagga is a rural area, and so the website for our vet says many of the doctors specialize in ‘herd health’. We have 3 cats, maybe they should come to us – that is a herd – rather than us having to go there.

Once all where caged up, off we went to see the doctor. I get there right on time for a 10:30 appointment and am greeted at the clinic by chaos. It probably took 10 minutes before anyone acknowledged I was there, because they were completely frantic on the dog side. Our vet has two doors – a dog reception and a cat reception. They go to the big room, with just a reception desk area separating them so there is  still a lot of barking and huffing and whatever else dogs do, but at least they can’t see the cats and the cats can’t see them.

Seems there were a lot of dog emergencies this weekend. Not sure why, maybe has something to do with it being snake season. And other emergencies too, being handled on the phone where the receptionist  just kept saying the doctor would be out that afternoon. Probably out to see someone’s horse…it sounded like it was going to be a long day for the vets. 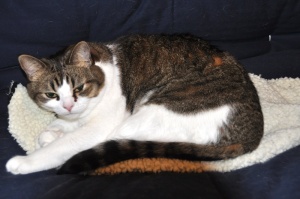 He’s a sweet and docile kitty until you get him near a doctor…then you need to get Max von Sydow in to stop his head from spinning.

Overall, when we finally got in for our appointment at 11:15, things went really quickly. They get weighed, vet looks at them (and says how wonderful they all look…Wagga isn’t really an indoor cat city, so I’m sure she’s used to seeing a lot of scruffy cats), checks hearts and temperatures, gives some shots and we’re done and dusted.  Out the door in 15 minutes, with a 20% discount for a multi-cat visit…and back home.

It wasn’t really as pleasant as it sounds, because Lester, normally the happy one of the bunch, was his usual vet-office crazy, hissing and biting at everyone (me, Ellie, Malachi, vet, assistant…).  Malachi wouldn’t come out of his carrier, but did Ellie find a nice warm computer to sleep on. 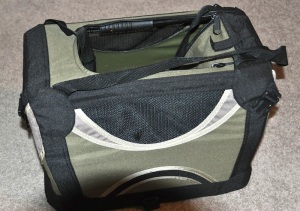 What a strange idea, a cat carrier to carry a cat in. Maybe this will catch on in Wagga.

The fun part of the trip was seeing the other clients and animals at the clinic. Like the woman carrying her cat in her arms, who marveled at the nice carriers I had. “What a great idea to put them in suitcases. They almost look like they are meant for animals.” Duh.

Then there was the guy who came in with his scruffy little black dog that has been “sicking up” for a couple of days. And then that morning outside eating grass and “diarrhea-ing it right back out like green water.”  I don’t know if sicking up is a common Australian term, and have never heard diarrhea as a verb before. It could be that this guy’s vocabulary was right up there with his animal care skills. Oh yeah, the dog has also been falling over a lot the last couple of days. Conversation went something like this:

So out they go, have a brief chat, guy puts his dog in his ute (front seat, not tray) and way they go…

One of the emergencies involved a woman talking something in a cardboard box, reassuring the animal (that I couldn’t see) that everything would be OK. When reception finally gets to her, turns out it is a magpie was referred to this vet by WIRES, an animal rescue agency.  I asked the nurse about it when we were weighing the kitties. WIRES sends most of its  Wagga cases there, they evaluate, fix and send back for rehabilitation. Or euthanize, if not able to save. This wounded magpie had been found in The Rock, a little town about 30 km south of Wagga. She didn’t know any more at the time.  Later, she told me that it had to be put down, because it had one of its legs chewed off by probably a dog or cat.  Readers will know that I have a serious love/hate relationship with magpies. The Australian magpie (a very different bird from the magpies in Canada) is a really cool bird – it has one of the most incredible songs of any bird. But they are also mean bastards who attack cyclists – I have been hit by 7 of them this year, and had at least a dozen more close calls. So though I don’t like to hear of any animal suffering, at least it was a magpie and not a parrot.

This was interesting because it followed closely a conversation I had late last week with a Wiradjuri woman at work about birds; she spends a lot of time in local schools, talking to kids about Indigenous culture, and Australian flora and fauna, and always tells them keep your cats inside because they are destroying the native bird population. And then it happens…might not have been a cat, but still it was some introduced domestic animal, like that poor doggie that was sicking up. When I left, the receptionists were freaking out because they had called all the other clinics in town that are open on a Saturday and he hadn’t shown up at any of them. They were reconcile sending him away…but they couldn’t have handled him that morning.  And that guy is an idiot. His dog shouldn’t suffer because he is too bloody stupid to take care of it…he shouldn’t even be allowed to have a dog.  He would probably let it attack a magpie.