With this move, we’re leaving our first house. When we decided to buy (after 15 years of renting, first in London, then in Edmonton), we quickly realized that we wanted to buy a new build. We looked around a few new neighbourhoods in Edmonton, decided what was both affordable and livable, and looked at what models were being built. We walked through some cheesily-furnished showhomes that didn’t at all resemble what we would really live in, figured out which one suited us best in terms of number of bedrooms and bathrooms, kitchen layout, etc., and made our decision.  Then the fun began; picking paint colours, style of cabinets, colour of hardwood, etc. Buying a new house is kind of like going into Bootlegger for jeans; you’re really just figuring out where you want your ass to be for the next few years. You look at the price tag, decide it isn’t outrageous (as a house/jeans comparison, we were happy in the Mavi range, rather than True Religion), pull out your credit card and it’s yours. Simple transaction, not a lot of thought: ass feels best in this one, I’ll take it! 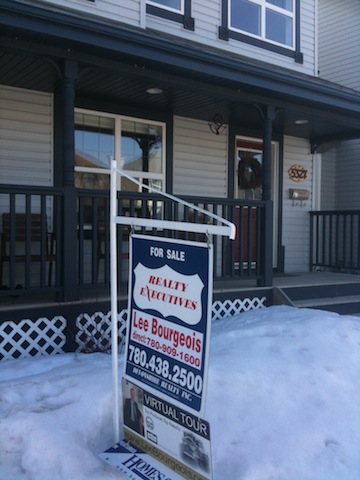 The sign offering our home for sale. Note there is no price tag.

Now we’re selling our house. And the real estate game with a previously owned (pre-loved) house is a whole lot different. Probably a lot different than buying used jeans too.

Several weeks ago, when we decided to move, we called the agent who seems to sell most of Terwillegar Towne. There was a house down the block on the market forever (multiple agents, Comfree) and then Lee Bourgeois listed it and it sold in a few weeks. So we figured he must know his stuff. He came for a chat, gave us some info, a tentative listing price, and said to call him when we were ready to go on the market. He looked and talked just like Lisa’s big brother Brent; we were sold!

The day after we got the visas, we called Lee again. He came over, we revisited the price (market hasn’t picked up, so we wouldn’t be getting what we hoped, but still a healthy profit), and signed a contract. After having our cleaning lady come in, we went live on Lee’s website around 4 pm on Friday afternoon.  Within 24 hours, we had two interested parties through the house, and a third within another 24 hours.

Would you buy a house from this cat?

This is the weird part. You basically leave your house and let some stranger sell it to some other stranger. No other retail transaction we can think of works that way. Shouldn’t we be there to answer questions? Show them around? Make tea? The cats sure can’t do it (though we do rely on them to secure a high offer by looking cute and not cleaning their butts during the viewings).

But no, it is a total stranger selling our house and acting as an intermediary. Sure, we could have gone with Comfree or some other DIY sales method, but then we’d have to sell it ourselves, and we don’t want the hassle. But some input might be nice. Of course, if you’ve ever seen the show “Moving Up” you probably know why owners are not allowed anywhere near buyers — too attached to that floor tile choice, etc. Sigh; not everyone has our exceptional taste and sense of colour.

By Sunday dinner time, two of the three parties had been through for a second viewing, and the third party was on notice that things were heating up. Lee called to say we had an offer and wanted to discuss it.  This, we realized, corresponded with one of the viewer’s agents leaving a business card on our kitchen counter – what we now know is a sign that an offer will be forthcoming. That agent was Asian, and we learned that her clients were also Asian.  Another party was of South Asian descent, as was their agent. We started to wonder if our WASP-y design elements (yes, we have a china cabinet with Royal Doulton/Royal Alberta wares) would deter or attract potential buyers. What about our the beautifully landscaped backyard – perfect for BBQs and entertaining (during the few weeks when there’s no snow on the ground), but would it be viewed as non-kid-friendly? We’ve now had people from all walks of life through our home, so it’s interesting to see that our place seems to suit people from all different backgrounds. Probably the same at Bootlegger; no one asks where you’ll wear those jeans or what you plan to do in them… Probably for the best.

Our first offer was a “low-ball” (in Lee’s words), so we countered. This went back and forth for some time. We hate bargaining; give me a reasonable price and it’s yours. Who has time for this bargaining thing? Why do people do this? We’re used to looking at a sticker price (grumbling, in our quiet, WASP-y way) and paying – or not.  We don’t take the $98 jeans to the counter and offer, $90, hoping they will counter with $94.  On our recent trip to South America, we were expected to banter over the price with local crafts-people; but it wasn’t easy, given that we make a lot more money than they do (“Gee, $1.50 Cdn seems too much for that beautiful hand-carved cheeseboard; can I give you $1 instead?”).

Anyway, that first round of bargaining didn’t pan out, so we were back to waiting for Dan’s iphone to ‘ding’ with a text from Lee that someone has made an offer (yes, Lee even got his own, personal  iphone ring). The most common ‘ding’ is that we have to abandon ship because someone is coming for a viewing. The house has been shown a couple more times, and as of this post going live, we’re now in the ‘pending’ stage of another offer. That means that there are a few conditions on the offer that have to be resolved. Nothing serious that should prevent the sale.  The buyers want a home inspection. No problem – there’s nothing wrong with our house. And they are also in ‘pending’ state on their current home, so as long as that doesn’t fall through, it is pretty much a done deal. The offer was reasonable, and we accepted ‘as is’, with no back-and-forth negotiating. Of course, we’ve still got active viewings happening (ours is clearly a “hot property”), in case things fall through. Now we’re just keeping our fingers crossed!

And while we aren’t second guessing ourselves, at some level you can’t help but wonder could we have gotten more. What if we bargained better? Could we have negotiated another $1000 or more?  Who knows? Who cares? We are happy with what we will get, and happy with the proposed possession date.   Did we list too low? What if we jacked the asking price up $10,000, knowing we would get 1/2 of it? Maybe we would have gotten a bit more. Or maybe we’d be flying off to Australia still paying a mortgage on an empty house. Now that would be scary… In the end, a key lesson learned — price right and move on! Do Waggan’s bargain? Time will tell…

But even after all this, the really weird part of the selling process is that we also need a “Real Property Report”. We pay (a predetermined rate – no negotiation) a surveyor to come and survey the property, charting out the house, the garage, etc. Then we have to pay the City of Edmonton for a Certificate of Compliance, verify that there are no ‘encumbrances’: they ensure that the house is properly situated on your property,  not the neighbours’ property, not city land.  One would assume that the builder followed the plans correctly, so all should be fine. Unless, when we go to work each day the cats (like the POWs on Hogan’s Heroes) are down in the basement, surreptitiously digging. Maybe they moved the house, foundation and all, a few feet to the north and we haven’t noticed.  But if they are that good, they could probably hack into the city’s computers and alter the plans. Hmm… what do they do around the house all day? Time to install CCTV (yes, they have this in Australia).