A couple of weeks ago, one of Dan’s colleagues asked him if he was going to their union meeting, where they would be informed about salary negotiations for next year. In his typically sensitive and caring way, he responded “Why would I care how much of a raise you losers get? I’m out of here!” Later that day, someone invited us to a local bar to watch a televised debate between (some of) the party leaders campaigning for the May 2 general election in Canada. The invite came with a disclaimer that it was more of a social thing, because we probably didn’t care, given that we are leaving. WRONG! Oh so WRONG! We didn’t end up going, for a variety of reasons (busy selling a house, and the debates are usually just bumpf anyway – better to read a newspaper). But yes, we still care about what happens in Canada; we will be voting on May 2, even though we won’t be living here much longer. And before the next election in Canada, we will be figuring out how to vote from abroad. Canada is home, has always been home, and in a way probably will always remain home. 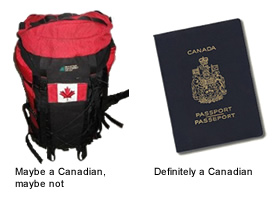 We haven’t looked into specifics yet, but regardless of how long we stay in Australia, we hope to be able to also remain Canadian citizens. Within the Commonwealth, dual citizenship is probably do-able, and having a Canadian passport when traveling is better than a Canadian patch on your knapsack. The latter is for Americans who want to be perceived as Canadians; the passport is the real thing. We both pay pretty close attention to politics, and have voted in every election – federal, provincial, and municipal – that we were eligible to vote in. And one that we weren’t legally eligible to vote in, but we won’t discuss that… Even trivial student elections in university, we voted in. In democratic nations like Canada and Australia, we don’t just feel there is a right to vote, but an obligation or duty to vote. In late March, there were state elections in New South Wales. Waggans re-elected Daryl Maguire of the Liberal Party, which is part of the ruling Liberal – National party coalition. (FYI to Canadians who pay attention to Harper’s concerns about a coalition government, they are pretty common elsewhere.) The Liberals have won every election in Wagga since 1957.

The political spectrum as we know it. Where do the Australian parties (and people) fit?

They are a centre/right coalition, with the Labor party being to the left. Not sure what that says about Wagga, but we think that centre/right on the Australian political spectrum will be far left of what is in store for Alberta if the Wild Rose Party or many of the contenders for Ed Stelmach’s job at the helm of the conservative party have their way. And also left of what Stephen Harper and his team want federally. The good thing about having just missed an election in NSW is that we didn’t have to suffer through one we couldn’t participate in. By the time of the next one, hopefully we will be eligible to vote. Nationally, the next election is to take place in October or November, 2013. That might be a challenge for us, as we probably won’t be legally allowed to vote yet, and getting away with that twice is probably too much to ask. We’re not clear on municipal politics in Wagga yet, but will be looking into it. Politically, Canada and Australia are similar in that they both follow the parliamentary system. Regions elect representatives, the party with the most representatives names a prime minister. We don’t actually vote for a leader, unlike presidential systems (such as the USA). For those who have a hard time understanding how it works, it is all explained here very clearly.

It is a little-known legal requirement is that all blogs written in Commonwealth constitutional monarchies this week include the official engagement photo.

Canada and Australia are also both constitutional monarchies. Lisa knows what that means. She’s a fan of royalty, and is pissed at Dan for not hooking up the PVR since we sold the television in the basement; watching the William and Kate wedding on April 29 is on her to-do list. For Dan, it’s all just blur. .* How being constitutional monarchies affects day to day life makes sense to Lisa, but isn’t clear to Dan. But trying to explain the complexities of it would baffle him, so it is best to ignore it. Rather than the constitutional makeup of the country, the more important things for us when choosing to live in Australia were the overall principles and prevailing attitudes. Well, those and the weather. And the likelihood of seeing koalas. And the likelihood of seeing kangaroos. Would you take a new job that didn’t offer marsupial incentives? Of course you wouldn’t. According to the online guide to becoming an Australian citizen,

Australia is a democracy. Citizenship gives you the opportunity to fully participate in building our democratic nation. It means that you are ready to fulfil your responsibilities as a formal member of the Australian community. Australians believe in the dignity and freedom of each person, the equality of men and women and the rule of law. Australian citizenship is about living out these values in your everyday life.

For our visas, we had to sign a statement saying we uphold the values of Australia; we signed the short temporary one, but for permanent residency or citizenship, we will have to agree to the full version. That won’t be hard to do, as it seems very similar to Canada, where freedom of speech, freedom of religion (including freedom from religion -the pledge that new citizens have to take can include god or not), equality, diversity, and so forth, are important both in theory and, mostly, in practice. Sorry, this is a bit of a boring entry. But there are two points we were try to make: we aren’t abandoning Canada, even though we are leaving; and, voting is important. So, please, all Canadians reading this, on May 2, VOTE. We don’t care who you vote for, what is important is that you take a few minutes and do it. We still care about this country, and keeping the democratic process alive is the most important thing you can do. Actually, that is a lie. Vote NDP, Green, or even Liberal if they have the best chance of beating the Conservatives in your riding. That is the most important thing you can do. Like we said, we still care about this country! * Lisa here…just want to point out that most of this post was written by Dan. Even though we already have our visas, one of the criteria was not being offensive to the Australian population. So I am carefully watching what Dan writes. There is also a policy about not bringing anything into that country that might be deemed offensive; unfortunately, I can’t just leave him here, so for now, I will do all I can to make him as least offensive as possible. How I will manage to keep him in check once we get there, I don’t know yet. For the record, Dan hooked up the PVR last night, so all is well in the Commonwealth.

Canadians newly relocated to Australia.
View all posts by waggadventure →
This entry was posted in Australia, Canada, politics, Visa, wagga. Bookmark the permalink.