How to speak Australian

For the readers out there who may be wondering, Wagga Wagga is pronounced wogga wogga. The ‘a’ isn’t a long ‘a’ as in hay, or a short ‘a’ as in cat, but more of an aw sound as in Australia. The first ‘a’ is the one you want, as it seems that Australia has the entire spectrum of ‘a’ sounds in it: \ȯ-ˈstrāl-yə, ä-, ə-\. Not to be confused with one of Lisa’s favorite fast food restaurants, Wagamama.

At least we don’t think so…never heard anyone actually “in the know” pronounce it. Maybe we can get a franchise when we move (waggawaggawagamama).

There’s lot of other fun and odd things about the Australian language that are useful to anyone moving there, and may be of interest to blog readers.  So this post is sort of a dictionary of ‘Australian’ for those who live elsewhere. Dear Aussie readers… please ignore/forgive these ramblings (but feel free to add your own cool phrases to help us out!). We expect to be using these terms commonly in future posts, so please take note. Perhaps these are part of the Australian citizenship test (much like “maple syrup”, “beaver”, “tarsands”, “eh?” and “Tim Hortons” are on the Canadian version).

CBD: central business district. Maybe other places use this term, but we haven’t heard it elsewhere. It refers to what North Americans call ‘downtown’ (if we hadn’t just put super-sized malls on the outskirts, that is). Wagga’s CBD is fairly small and compact but thriving and inviting. Wagga has a hardware store, a drapery shop… all downtown! This will be an adjustment from Edmonton (home of the world’s largest, don’t you know!).

Cellar door: the term used by Australian wineries for their visitor shop, where you stop in and buy wines. Probably seldom actually the door to a real cellar (though we will investigate and report back in a later post).  Again, maybe a term used elsewhere but not widely.

Dan had a red El Camino when he was a teenager. It wasn't as nice as this one, but it was a lot of fun.

Ute: the first hybrid vehicle; the front is a car and the back is a truck. Australians seem to think they invented them; maybe they did, but they were available in Canada for a long time. Dan actually owned a 1967 El Camino when he was younger.

Ferals: akin to wild (‘feral’) animals, these are annoying, trouble-maker kids/teens who hang out on the street. In the UK, these might be known as hooligans. Others might call them hoodlums, ruffians, etc.

Bogans: Australia’s equivalent of the North American ‘trailer trash’ but since ‘caravan trash’ just doesn’t roll off the tongue as easily, they have their own name.

Other cultures might call them rednecks, pikeys, neds, gopniks or yobbos. Bogans often drive utes. Does this mean Dan was a bogan when he had the El Camino? One of the traits of a bogan, according to one website, is that they listen to AC/DC and Midnight Oil. Seems like an odd pairing: a dumb party band (in a good way) or highly literate, socially and environmentally conscious artists.  No mention of The Saints, however, Dan’s favorite Australian band.

Caravan: a trailer-like thing used for vacations. In North America these are known as RVs (Recreation Vehicles) and seem to attract tornadoes (or, in Wagga, water). Brad Pitt knows all about Caravans. Wagga actually had a caravan park on the river where you could rent a strange hybrid cabin-like thing on wheels for your vacation. You couldn’t move it anywhere, despite the wheels, but you could stay in the park. Sadly, they are closing it because they are redeveloping the park.

Mince: ground meat (i.e., hamburger in North American terms). Goes into yummy pies (not to be confused with mincemeat pies; those are just dried fruit and stuff and not all that yummy).

Black Chook: one of the very few wines worth buying with an animal on the label.

Chook: chicken. Probably not the meat, but the animal before it is killed for meat. To outsiders, chooks probably aren’t considered as cute as wallabies, koalas, or kangaroos. Or as interesting as ibises and kookaburras. Those cute and interesting animals have, in recent years, been the scourge of the Australian wine industry and anyone who knows wine will tell you not to buy a bottle of Australian wine with a cutesy animal picture or name on the label. We agree, but make an exception for Black Chook, a yummy shiraz/viognier blend.  We also make an exception for Shadow’s Run, a good value shiraz/cab blend with a now-deceased dog (Shadow) on the label. We will report back on other animal-themed labels worth drinking, once we’ve gathered all the empirical evidence.

Mr. Whippy: no, not some demented kids S&M program, but a soft-serve ice cream truck. Not really very good, and probably not worth mentioning, except for the name. Truly, this was our first introduction to Australia; after suffering through a 15+ hour flight to Sydney, and a 6+ tour (on foot!) of the city (thanks Michael!), this was a welcome treat! In Canada, we call this ‘soft-serve ice cream’.

Footy/Australian Rules Football/Aussie Rules/Rules: not exactly sure yet. It isn’t rugby, it isn’t soccer (aka football in the British sense), it isn’t football (in the North American sense). From an outsider’s standpoint, it seems to be pretty much a free-for-all where the only rule is if someone has the ball, attack them. Only strategy is if you are holding the ball, get rid of it before you get hurt.  That’s probably not an accurate description, but it will take a while to figure it out. Details to follow.

Rugby: not much more clear. There seems to be two kinds of rugby, Rugby League and Rugby Union. Some people must care about the difference, but then again some Americans also care about, and understand, the difference between National League and American League baseball. We are not those people. Canadians play hockey; there is one kind of hockey (oh wait… that’s “ice” hockey; there is field hockey, but that’s for girls).

Winter: south of the equator, winter occurs during the months of June, July, and August, when Australians think it is cold. Few Australians have been to Edmonton in December, January, and February (the northern winter), when Edmontonians think it is cold. During our first trip to Australia a few years ago, the locals thought Dan was crazy for wearing shorts in July. It was as warm there as it was in Edmonton (20 degrees Celsius).

Woolies: No, not some item of clothing made from the wool of those millions of sheep in the Riverina. It doesn’t get cold enough to need woolen wear. This is a short form of Woolworths. Department store, grocery store, and bottle shop.

Bottle shop: where you can buy Black Chook, Spot’s Run, but hopefully not YellowTail, which is actually more of an export commodity. Most bottle shops in Wagga, such as BWS (Beer Wine Spirits), stock mostly Australian wines (this is a good thing), Australian beers (ugh…this is going to be an issue), and Australian spirits (Bundy and coke, anyone?), but not a broad selection of imported ones. 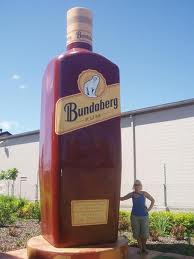 One question - why do they have a polar bear on the label?

Dan will have to make the occasional run to Sydney for good scotch. All visitors are on notice – bring non-Australian anything!

BYO: designation for restaurants that let you bring your own booze. Unlike North America, they don’t charge an outrageous corkage fee. The Wagga Thai restaurant is byo, and no fee at all. What a concept! So while on the way to restaurant, you go to the bottle shop.

Bundy: Bundaberg rum.  Made in the town of Bundaberg. Can be bought in cans, premixed with coke, at the bottle shops. We will probably never try it.

Hairy panic: still trying to figure that one out. Watch this space…

4 Responses to How to speak Australian