All in the Family

After a fantastic meal (okay…we cooked it, so we’re a little biased) and fun at Dan’s sister’s place, followed by a lovely brekkie in the morning (thanks B!), we decided to check out what was new and happening around town before heading to Lisa’s parents’ house. Dan had a special errand to run that day (more on that in a later posting), and we followed that with a great lunch at a new Thai and Japanese (strange pairing, no?) restaurant in town – Yummy Yummy! Seriously, that’s what it’s called. We always like to check out the shops and restaurants around the main street when we arrive in town (which takes all of 15 minutes); we made a trip to the Ginger Press, stopped in at Phoenix Bookshop (owned by Dan’s sister and brother-in-law), and wandered town from end to end looking for new places to eat and shop. 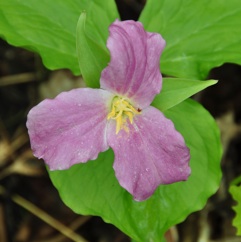 For the last several years, we have only been going to Ontario in the autumn, but in the spring, trilliums are in bloom. The white trillium is the official flower of Ontario. This somewhat more rare purple one was growing just south of Dan's parent's house.

Despite initial misgivings (Owen Sound isn’t known for its culinary greatness, particularly when it comes to Asian cuisine), but armed with a recommendation from brother-in-law D., we were happy to find that Yummy Yummy came by its name honestly. It really was yummy, yummy! So yummy that we actually went back for another visit later in the week (and yes D., Lisa did order the same dish twice and it was the same both times; green basil curry with a nice kick to it… mmm… super yummy! Yummy yummy.).

Food, family and friends are closely linked in our lives. We meet and greet while we eat, and this trip to Owen Sound was no exception. One of our fav places in town (though not on the roster this trip, unfortunately) is Norma Jean’s Bistro, the site of our first date – history in the making! Many people in town also enjoy the Harrison Park Inn, which has been the site for many family dinners with Lisa’s family (and yes, we ate breakfast there twice on this trip). On Dan’s side, the Wiarton Inn & Restaurant (north of Owen Sound, on the way to Pike Bay) has been the venue for many “ThanksGiven” dinners.

We took gifts (photos of us from formal night on our xmas cruise) to Dan's parents. Like all cats, their cat, Bear, much preferred the packaging.

On this trip, we had two very special farewell dinner events planned for us, which together showcase the many great times we’ve had over ‘bread and wine’ with our families. The first was a family dinner on Lisa’s side at Shorty’s Bar and Grill. Yes, it’s a sports bar but it has great food. We were thrilled that H & J could make a surprise visit to join us, after H lied to us in April saying we wouldn’t see them again before we left. They’re just lucky we don’t hold grudges and will let them visit!

The second was a family dinner at Dan’s parents’ place in Pike Bay. Dan’s mom made her famous, super-cheesy lasagna (with venison mince! Now that’s yummy, yummy) and perogies (thanks B for grilling those to perfection on the BBQ) and the siblings brought a ton of salads. All this, topped off with not one but three desserts — blueberry pie, cherry pie and apple crumble. Yes, we tried more than one (how can you choose?).

Who doesn't love a grizzly bear breaking a hockey stick! How Canadian is that?

Another key event this trip was following the happenings of the Owen Sound Attack – Ontario Hockey League Champions – as they played in the Memorial Cup. We are not sports fans. We don’t watch hockey (sorry – “ice” hockey, as the Aussies say);  we don’t even like hockey. But you have to feel a great deal of pride for the home town team, especially when they’ve had their best season since time began (or something like that; suffice to say that they didn’t even make the play-offs last year). By the end of the week, Lisa could tell you that Hishin and Wilson were out for the series with injuries; she was on the hunt for a hoodie…again (more on that in the next post)… but the fans in OS beat her to it! No luck there. Dan, on the other hand, would just shake his head in dismay, while worrying that Lisa was becoming a true fan. He did wonder what beer logo the Kootenay team logo resembled most closely… but that’s the extent of his hockey knowledge. In the end, the Attack lost the tie-breaker game that would have secured them a spot in the semi-finals for the Championship… and Lisa promised to stop watching (at least till next year). She hasn’t promised to stop shopping for a jersey or something, though; the Attack logo is just too cool!

Another staple of family get-togethers is the game-play. No, we don’t get into family cage-match fights (though it would be fun to bet on specific pairings… hmm… perhaps a future blog post), and no, we don’t sit around dreaming up how to mess with one another’s heads (wait, maybe we do… how would you know? Paranoid anyone?). No, the traditional games we play on visits home are serious marathons of bid euchre on Lisa’s side and “12 games at once” Yahtzee on Dan’s side. Yes, we live on the edge; we’re crazy people… And we have a competitive mean streak. We’re also very good at these games. Oh yes – and cribbage. And Dan and his dad play a lot of crokinole. Sprinkle in a few walks in the woods/nearby subdivisions and the odd glass/bottle of wine/beer and you’ve got yourself a good ol’ Ontario weekend! Look out Wagga… we will be bringing all of these games with us. Happily, given the Scottish influence in both Canada and Australia, games like euchre are common to both countries. Yahtzee and crokinole… we’re not sure, but we’ll do our best to infiltrate! 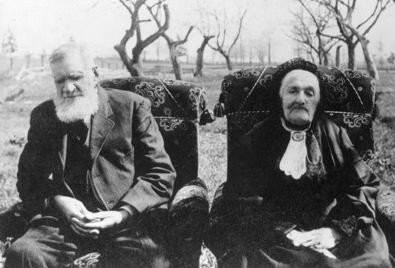 Lisa's great-grandparents had nice chairs but no house.

Another important part of family gatherings is sharing family stories, looking at photos and asking questions of those who “were there when…” On this trip, we decided that it was time to borrow some old family pics and get them scanned to digital. Many old pics, especially those from the early 1900s are rapidly deteriorating. And, thanks to the wonders of Photoshop, Dan will have his first project in Wagga – to do a bit of cleanup to these pics and then send them around to family members. We really enjoyed hearing all about the people in the photos (cousins, great-grandparents, etc.) and sharing a laugh at some of the old stories. And, when we’re on the other side of the planet, we’ll now have some great mementos to carry with us.

Dan's great-grandparents had a house, but we don't know if they had furniture.

As you can see, this was a bit of a nostalgia trip… including some tears and lots of hugs and kisses. We’re so glad that we had the opportunity to see everyone and spend time together. We had some great (and much needed, after all the kijiji-ing and packing!) down-time… and also had the chance to plan for the future. We helped Lisa’s sister buy a new computer, so that she’ll be able to run Skype for long-distance video chats. And, we showed Lisa’s brother how to run Skype, so that he and Lisa’s parents will be able to connect for some video conversations, too. Lisa even scored a new Ipod when she found one at the side of the road while walking with her dad and sister. Dan’s thrilled at that, since it will add an extra 16 MB of music for the long flight to Oz. And Lisa’s happy, since that will cut down on the interruptions from Dan (“are we there yet? Are we there yet? Where’s the flight attendant with my wine?”) while she’s watching a multi-movie marathon in flight.

2 Responses to All in the Family