Writing this blog has been an important part of the move. It has helped us to reflect on the process, and it has also let us tell people what we are doing en masse; telling people individually would be too hard, so even though it is a bit of work, it just gets done once.

Sometimes, though, there are more important things to do.  This week, we’ve had to prioritize and rather than think up witty titles and captions, we had to get on with our lives. But, because we don’t want to disappoint our friends, here’s a bit of a photo-blog of the last week.  From this you will see why we haven’t had time to write much.

This is where we live. It is a nice house in a suburb called Kooringal. The Canadian way to pronounce it would probably be KOORingal, with the emphasis on the coor, , or maybe on the second one as in KoorINgal, but Aussies seem to speed things up and almost eliminate the middle syllable. So, we’ve learned to call it KOORinGAL, almost like saying KRINGLE (like Kris Kringle; every time Lisa hears this word she thinks of snowy Christmases back home).

The house is owned by Australian Defence, and would normally be occupied by members of the military if the Wagga base was operating at full capacity. Sorry, J&H, we know how horrible the Canadian military housing is…but this one only has a few cheap finishes; overall it’s pretty good. 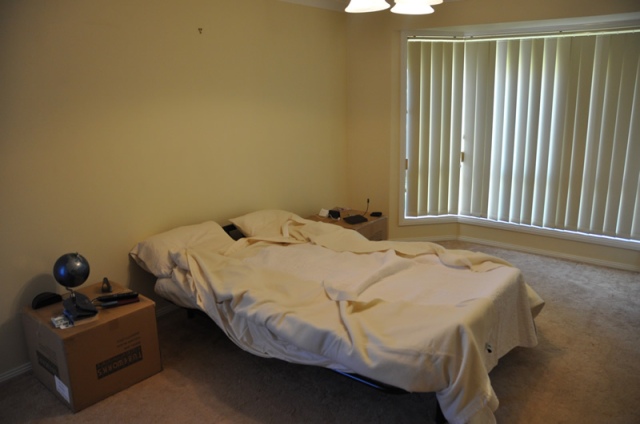 This is where we sleep. New futon; bedside tables are cardboard boxes that the bar stools (later photo) came in.

This is our entertainment. We actually get quite a few channels free over the air (yes, they still do that here). We may include a dvd player soon though. 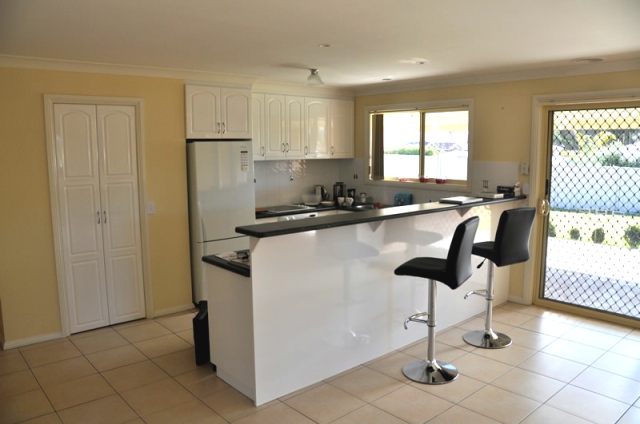 This is where we eat. We have 4 stools actually, but Dan hasn’t gotten around to assembling the other two (which is fine, since we won’t be having people over any time soon). The fridge is ours. An odd thing we found is that Australian rental houses don’t come with them. Apparently, Aussies take their fridges with them wherever they go (okay, maybe not to the beach… but everywhere else).

This is where we cook.  Yes, the house came with a stove (and a dishwasher, thankfully!), but that would require us having pots and pans. Dan can do pretty much anything on one of these anyway.

This is part of the rest of the house. It is a 4 bedroom, 2 bathroom house, with a huge dining room, and 2 separate living rooms.  We are living in the kitchen and the master bedroom. Living space is about 1800 square feet; that doesn’t include the bathrooms, the hallways, the closets (some are huge!), and the laundry room (we had to buy a washer/dryer too). Even when our furniture gets here it will be a bit bare. 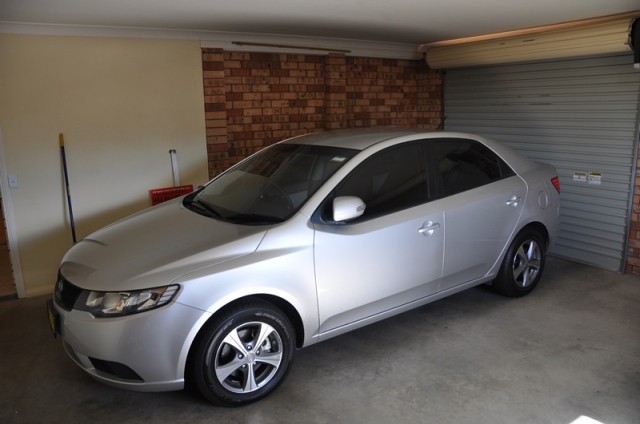 This is what we drive. It is a 2009 Kia Cerato. It was a dealer demonstrator, so though 2 years old it only has 3200 km on it and we got it at a good price. Sorry M., we know you recommended against a Korean car but these have not bad reviews and because we have no credit rating here, it is what we could get for cash.  It rides fine, has a good radio, and will do until we can afford a BMW.

This is Dan’s new toy. A Cannondale Quick 2. Lisa has one too…just has to pick it up from the shop. We plan on taking advantage of the Australian weather and riding a lot (until it gets too hot to go outside, of course).

And we’ve been busy buying basic household needs, small appliances, insurance, phone and internet, etc. And killing spiders. Dan has been forced to do most of the round-the-house stuff (not his comfort zone!) while Lisa works. Many of those adventures (how do you buy a car when you don’t live here?) will be the subject of future posts.