summer in the city

Lisa has been in North America for almost  2 weeks, so I’ve been learning about what Wagga is like in the summer. She did this to me when we moved to Edmonton too…went back to Ontario for her PhD defense in December, 2000, leaving me to freeze in our first Alberta winter. I will never forget the day she left.

It was December 8…I remember this because on the trip to and from YEG K-Rock was playing John Lennon’s music on the 2oth anniversary of his death…it made me want to hurl. I don’t mind the Beatles (OK, actually they bore me), but most of Lennon’s solo stuff was horrible. And I just can’t take that level of sentimentality and hero worship… I took her to YEG very early in the morning, then went to work at UofA. Because Edmonton was so far north, it was still dark and cold. Really cold. Really f#%$ing cold. And I had to walk four blocks. For those who know UofA, we parked in N lot, beside Hub, and I worked in Extension (now Terrace). Half way, there is a Tim Hortons where I always stopped. So that morning, when it was around -40C, I get my coffee, go to my office, and see that I had been holding it so tightly that some had run out under the lid. And froze on the side of the cup. Froze. Hot coffee, paper cup, and ice. WTF was I doing there? That day, I also saw my first sun dog – a winter version of a rainbow, where the moisture in the air freezes and you see a colour spectrum. And then going home, a thermometer I had in the car never went over -30, despite having the heat on full. Yes, that is a lot of detail to remember, but it was my first day experiencing that level of cold, and it is something I will never forget.

And it is part of the reason we are in Australia…cold sucks!

Gotta love the accuracy of the weather app I have: 27 degrees, but feels like 26.9!

So when Lisa was planning this trip to North America, we were joking that I would have the opposite experience – that she would be abandoning me to the hottest days of my life. But, fortunately, that didn’t occur.  A typical day has started at about 20c, and gotten up to about 30-33. But there has always been a breeze – Wagga seems to be very windy! – so it is a pleasant low 30s. And the ‘evaporative cooling’ system in our house has meant it is usually about 24 indoors. Quite nice actually.

This gorgeous weather has meant that I have spent most of the past 2 weeks on the patio. All meals at home have been consumed out there (well, not brekkies…those are a bit of cereal and a grapefruit hoovered over the sink, but all dinners and lunches). I worked at home one day, out on the patio. I’ve determined that we don’t really need a house, just a patio! And I haven’t put on long pants in the whole two weeks.

The odd thing is that the bug population has died down. Earlier in the year, there were a lot of moths (and by ‘a lot’ I am estimating maybe 100 per cubic metre of air space…! A LOT!!!); those were followed by scarabs and other beetles. And flies and mozzies. And fruit flies that liked to do the backstroke in our wine. But the past two weeks have been pretty much bugless. They will probably return when Lisa does, and she won’t believe me when I say how pleasant it has been. But I guess if there were bugs banging up against the window, that would roust out the cats…I think there are cats here. Something eats that food that I put out each morning and evening, and when I come home each day there are indentations on the bed that look like cats. But for some reason, when their mommy is away they avoid me.

So besides having pleasant weather and few bugs, what is a Wagga summer like? Pretty dead. It is school summer holidays. No one is at work anywhere (the few of us at my job comment about how empty the halls are and how every email gets an ‘out of office until February’ auto-response), not much seems to go on. Even the farmer’s market was dead.And there is nothing going on in the neighouring towns; the regional reports in the Daily Advertiser talk about events in February and March, not January.

The  only people that seem to be working are the ones doing construction on the road to the uni. This has been a bit of an issue with me, because the diversion (detour in Canada-speak) adds an extra 2 km onto the morning commute. That is nothing really, unless you want to do it on a bicycle and 2 km and one extra hill at 8 am is too much! So, despite the fact that this would be a perfect time for me to be both health conscious and environmentally friendly by riding every day, I’ve been driving to work. I did, one day this weekend, ride the new route and was pretty proud that even with the extra hill it added less than 4 minutes to my time, which means I am getting faster. Because that construction is supposed to last into April, I guess I am going to have to start using this longer bike route because I don’t want to stop riding. But I’ve still managed to get in about 250 km of cycling while Lisa was away (weekend mornings and a few afternoons…riding when it is 32C is probably the cyclist’s equivalent of hot yoga…you need water!).

What else have I done? Not much. I’ve figured out which bottle shop has the best beer selection (not great, but good) It is in a bit of a bogan neighourhood, oddly…I can’t see why this demographic warrants it! 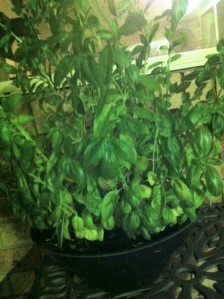 Basil grows really well here. This started out as 6 little plants, and we've harvested enough for a huge jar of pesto and a lot of pizzas and it just keeps on growing.

And I have perfected pizza on the barbecue. Sorry Wade, still not making my own crust, but I found that one of the big supermarket chains sells a really good cryovaced, imported-from-Italy, thin crust! And I determined that the expensive bocconcini doesn’t taste any better and actually doesn’t melt as well. And if you saute mushrooms in beer, they are more flavourful! So Lisa will be coming home to a great pizza margherita con funghi dinner in a couple of days.

Other than that, it has been a pretty uneventful January. Which seems typical for Wagga.

2 Responses to summer in the city