Posted on August 4, 2012 by waggadventure

We’ve been a bit lazy (busy?) about blogging recently, so had to ask for some help. This is a guest post by Wagga’s newest Canadian. Her own blog is beckyquarterly.wordpress.com. How many other cities of 65000 in Australia can claim to have two Canadian expats blogging about moving there? Probably none, but if anyone knows of one, I think we’ll have to go there and meet up for a pint! Now, here’s Becky…

So, how this blog post came to be. Lisa supervised my research project back when I was a grad student in Canada. When I graduated I started working as a librarian and Lisa began asking me when I was going to start my PhD. If you’ve met Lisa, you know that you can only hold out so long against her. She convinced me that not only should I leave my job and go back to school, but that I should move to Wagga to do it. And here I am.

Now, normally I get the, “You’re moving where?” when I tell people about my new hometown. Part of it is the name (no one believes a town is really called Wagga Wagga) but part of it is because it’s so far inland. I expect this from people who don’t know Australia or who live in big cities in Australia and think that big cities are the only place to live. But the thing that really interests me is the number of people from Wagga (Waggans? Dan, you’ll have to help me out here [Dan edit: that’s what I call them/us, but not usually in public and when I do say it publicly I get laughed at] ) who apologize for this lovely town. Now, I’m a big city girl, but I appreciate what this town has to offer.

I live in central Wagga and I wish I could convey to you what it feels like to walk out your front door and be surrounded by lovely brick houses with wrap-around verandas and gardens that would set most Canadians’ hearts aflutter. (They’ve got roses and irises blooming right now – and it’s the dead of winter. This is a magical land.) But it’s easy to focus on vegetation, scenery and wildlife when people take a look at inland Australia. I wanted to talk about what Wagganites (no, couldn’t be) have built. And since I don’t feel right about taking pictures of people’s private homes and posting them on the Interwebs, I get to show you some of Wagga’s public buildings.

Wagga is working at revitalizing its buildings and streets. One of the nicest things they’ve built recently is the civic centre. It’s the town hall, the art gallery, the theatre and the library all rolled into one lovely building. It’s right in the centre of town and next to a pond with an amphitheatre. They have the farmers’ market on the lawn. Across the street they have a park with an eternal flame that memorializes the wars that Waggians (hmm) have participated in. I would consider this the heart of Wagga.

Now, I’m concentrating on a small area of Wagga. But this is the area that I go to on a regular basis; it’s just outside my door. So don’t take this as all Wagganies (uh, probably not) have to offer, but these are some of my favourites. Close to the Civic Centre, past the Police Station, you reach Church Street. Church Street is aptly named. Three of the cities oldest and loveliest churches are on this street: the Presbyterian, Anglian and Catholic churches. This street is out of the way but a lovely find if you decide to go down it. Not only will you find the churches, but it ends at the beach. The beach is on the Murrumbidgee River, a large river that meanders its way across a large section of New South Wales. Wagga built up around the river (and, apparently, the horse racing track, the Murrumbidgee Turf Club). The churches, as well as the river, are lovely to behold. 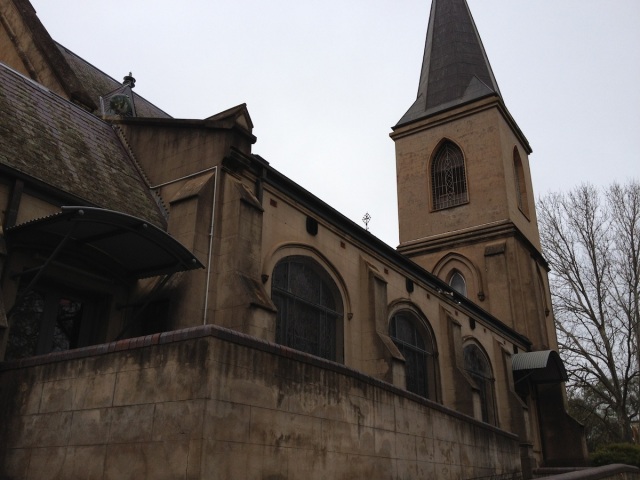 And that’s an introduction to my new hometown. And what a charming hometown it is.