How to speak Australian, Part 5

Snag: We often see people fishing in Lake Albert or in the Murrumbidgee River, and like any other closed water fishers, one of the big annoyances for them will be getting their hook snagged on a submerged branch. This is, of course, nowhere near as bad as the perils that face the open-water ‘rock fishers’ on the NSW coast…if you care to know more about that lmgtfy…survival of the fittest…but we do regularly see people fighting with…nothing. Just the branch of a gum tree that has fallen off and is causing havoc in the inland fishing waters of NSW. But that has nothing to do with this definition of ‘snag’. 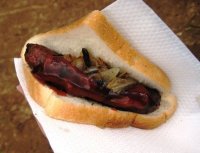 Does this look appetizing? No…not to Lisa either, who refuses to try one. But it is the Saturday lunch of choice for the hundreds of Waggans.

We probably explained ‘sanga’ in a previous HTSA post…these are what you buy at Bunnings on a Saturday, or at any local event – a thin sausage (this ‘thin’ distinction is very important, as you will see later) on a slice of white bread. Sort of like what you get at those charity hot dog sales outside the grocery stores in North America. But in NA, they call that (horrible) thing that they wrap in a bun a wiener. Here, that thing that gets wrapped in a slice of white bread is a sausage or, in some people’s terms, a snag. We’re not sure how common this word is. We don’t discuss sausages with people that often, so it isn’t something that would just come up. But one day recently we were at Blake Street Country Meats, our favourite butcher shop (we love living in place where there are real butcher shops…and of the dozen or so in town, we prefer Blake Street [and they love Lisa…when we want a special cut like the fillet steaks the good restaurants sell, she just loiters until Kerry comes out and asks “what can I get you love?”!]), looking for something for dinner and decided on some coconut curry sausages (these aren’t your normal Aussie snag…this is an award-winning sausage maker…but then pretty much every butcher in NSW displays a sign that they won some award, just like all the bakers have won an award for their pies) and the bloke at the counter said “just the snags?” We both quickly processed the fact that we aren’t in a country that speaks English any more (Dan was having flashbacks to trying to buy croissants in Paris!) and just said “Yes”, paid our $3, and went to the car. Where we immediately and simultaneously exclaimed “he said snags!” and praised ourselves that we knew what it meant. 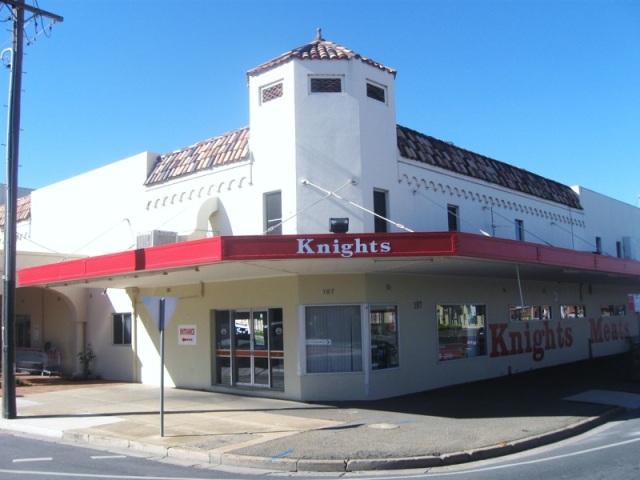 Knights is one of the many butchers in town. We shop there frequently, but it isn’t our butcher of choice. We like their deli though, which has an amazing cheese selection. And our favorite butcher isn’t very photogenic so we just used this picture.

But what we don’t actually know is: just what is a ‘snag’. In the early days, before we started shopping pretty much exclusively at Blake Street, Dan was in Kooringal Butcher (near where we lived, and still a good butcher but not our first choice), looking at the sausage selection. They had two types in the cooler that looked the same but one was thin and one was thick. So he asked what the difference was. And the guy at the counter said “one’s thin, one’s thick.” That’s it… so he bought the thick ones and had a hell of a time cooking them on the barbie. Since then, we stick with thin, regardless of where we buy them. The thin ones are good for sizzling, the thick probably better for…not sure why anyone would buy them!

Anyway, the point of this story is that regional Australia takes its sausages/snags very seriously, and if you are planning a sausage party you have to know if you like it thin or thick.